So we have this client who is great. They pay well, fun to work with and most of all, they value our work. Life was good. Then, as often happens, comes a new VP of Marketing. This guy is in Chicago, and before zoom calls were the thing, we spoke on the phone a couple times. Something big was brewing and this guy was brought in for a big rebrand project, and we were in line to get the work!

One day he calls me and says he wants me to come to Chicago and meet with him and the owners, as they wanted me to lead a whiteboard session to help with vision and general strategy…AWEOME! I thrive in helping companies create visions for their marketing and who doesn’t want to lead with strategy…I am pumped. Four days before I am to leave, he calls and asks if I can host the meeting. Why sure I said, that’s not a problem…just remember we are a small agency, and I am not in a fancy high rise etc….he said it’s fine, just send over directions and menu’s for lunch…perfect. Game on. 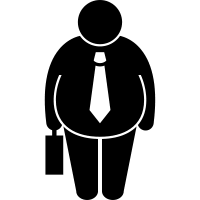 The day of the meeting comes, we are located in downtown Carmel, in a building built in the early 1900’s…old brick, two story…quaint. I will call the VP Scott, cause that’s his name. Scott comes about 30 minutes early and walks in the door. Sweaty, panting, and exhausted…it looks like the guy has just done a quick mile jog…oh, did I mention Scott tips the scales at over 500 pounds? A big ole boy he was. So we say our hello’s and Scott walks up the stairs to our meeting room and sits on our couch. Now, I don’t know about you, but who the hell thinks that a couch is going to hold a 500 pound person? He sinks in and doesn’t say a word.

The other guest arrive and we have a great 3 hour meeting. During the time, there is a part where the customer is supposed to go to the whiteboard and do some writing…fun brand stuff. Scott says he will do it from the couch on paper. Uh ok, I thought…sorda weird but let’s roll with it. Lunch comes…he doesn’t touch his food. I think, this is awkward, but maybe he decided to diet…starting today? Our Panera Bread box lunches were great and we went on with the session.

At the end of the day, everyone shook hands and the owners were just elated with my team, our process and the rebranding project, they told me to send Scott the contract tomorrow and to “get started immediately.” No better words have been spoken to me…I slept well that evening.

Contract sent to Scott at 10:30am, signed and emailed back to me by 11:45am…what to do now? I just received the ok for a big six figure project…what we always do, we celebrate…lunch on me! As half the team is out the door, I get a phone call from our main contract, Doreen. She said she has Scott on the phone and they needed to talk about the contract. Scott asks me about our cancellation policy. Then he goes on to tell me to rip up the contract, they will be cancelling it. Lastly, he says, and I quote, “we really don’t need to worry about the cancellation policy do we…I mean, it’s only been 5 minutes.” I am stunned. Of course not I said…they hung up.

Doreen calls me back instantly…I am so sorry she said. I am in shock, knowing I just promised lunch to 20 people to celebrate a sale, and now I have no sale…WTF? She goes on to tell me that Scott was pissed off at me. From having to park 3 blocks away, to walking up our steps to the second floor…to getting stuck (and breaking) my couch. Lastly, she said he was mad about the interactive portion of our whiteboard session…he was just embarrassed…period, and he thought I did this to him. So let me get this straight. I made you 500 pounds? MAYBE you should have told me about your situation and we could have accommodated for it, instead of showing up, meeting you for the first time and realize you were that size.

Doreen apologized profusely, but in the end, we not only lost that contract, but the entire client, as they went with Element 3, another agency just down the road, that has an office in a beautiful high rise building…with an elevator.